Another characteristic of VASGLASS laminated glass, branded as VAS-SAFE, is that, with the use of specially formulated combinations of components, they offer certified protection against criminal and terror acts by absorbing high-energy impacts, prohibiting penetration of the glazing system by either a bullet or its fragments.

Bulletproof glass is ideal for a number of risks. As far as appearance goes, they resemble standard glazing, however, it represents a transparent barrier against criminal acts. Each individual component of a bullet resistant laminated system ensures the transparency and aesthetic neutrality of the end product; however, the increased thickness of the composite system gives off a green hue.

For that reason, extra clear, low-iron glass is often selected for the individual components of the bullet-resistant laminated glazing, with the aim of creating a product that is as color neutral as possible. Another characteristic is provision of excellent soundproofing of this bulletproof glass. They also provide protection against ultraviolet radiation. 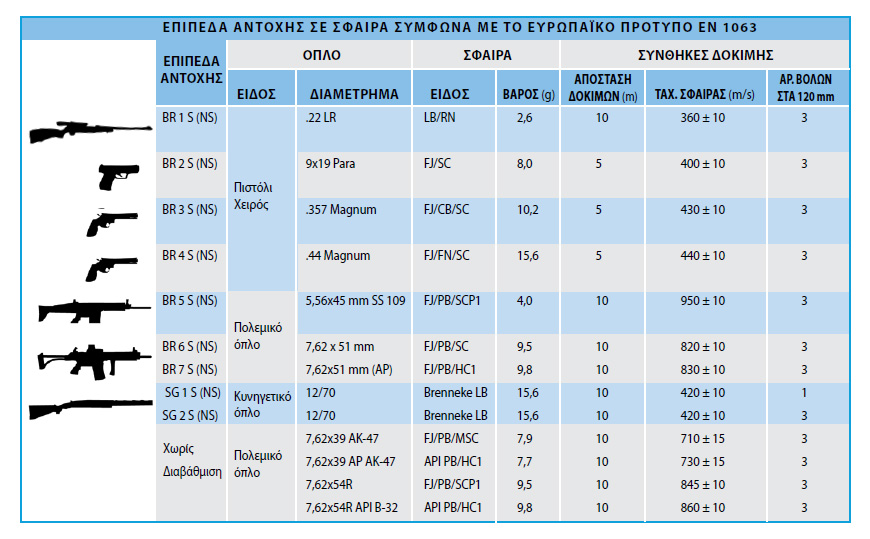 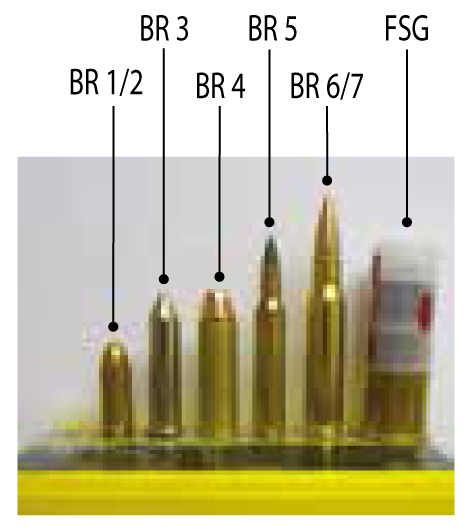 For European countries, the standard for laminated bullet-resistant glazing is ΕΝ 1063.


Bullet-resistant laminated glass is classified according to its resistance to the various types of guns and ammunition. The European standard defines bullet attack protection glazing that which can withstand specific strain (firing range, bullet speed, bullet weight, number of shots) against shots from specific weapons and ammunition. However, in some cases this is not enough and it is necessary that the rear face of the glass pane remains intact after impact, thereby eliminating flying shards of glass hurling through the space under protection. This is achieved by utilizing specially formulated combinations of components for the design and manufacturing of the bullet-resistant laminated glass.


According to EN 1063, these two distinct sub-classifications are indicated with the label NS (NON-SPALLING) and as S (SPALLING).


Classification of laminated bulletproof glass is often indicated in the product’s brand name and corresponds to specific performance levels BR1 to BR7 (S/NS) and SG1 to SG2 (S/ NS), certified by the competent bodies, in accordance with a specific methodology, provided in the European standard EN 1063. Weapons classified as BR1 to BR7 (S/NS) are distinguished from shotguns classified as SG1 to SG2 (S/NS) due to their significant differences in ammunition. Laminated glazing classification according to EN 1063 is independent of composition and exclusively dependent on the level of performance achieved during the testing process implemented under the responsibility of a competent body. 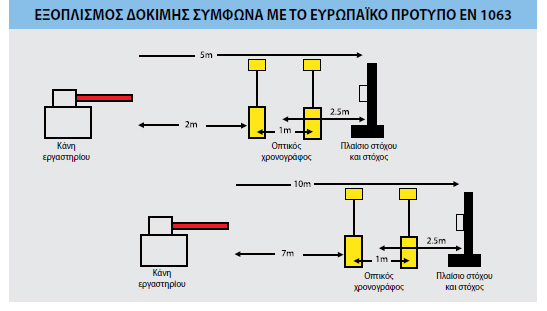 VASGLASS, manufacturing bulletproof glass security windows and always complying with the new European safety regulations, offers the VAS-SAFE ANTI-BULLET bullet-resistant laminated glass in the market, CE-marked, according to the European standard EN 1063 in all categories.


There are many factors to consider in choosing the optimal glazing system for a given level of safety and protection. VASGLASS, via its technical experts, goes beyond a mere producer-supplier of bullet-resistant glazing, by offering technical advice for the design and implementation of a system that best meets your needs. 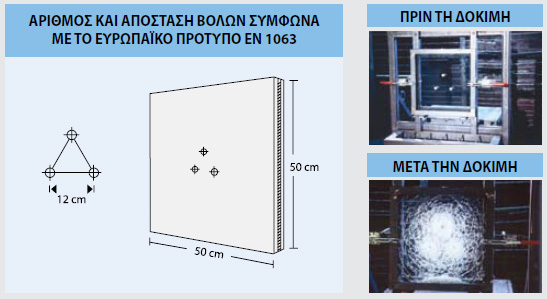 The aim of VASGLASS is to reduce the width of the bullet attack protection glazing, at the same time increasing its durability, with the aid of its state-of-the-art mechanical equipment and the application of innovative production methods.
Application of new technologies in the production of laminate components give rise to new, advanced materials, e.g. polycarbonate, ionomer, etc., that lead to glazing systems of reduced width and weight while improving their performance characteristics upon impact.
It is the duty and aim of VASGLASS to use such technologically advanced components and through specially designed compositions to produce new bullet-resistant laminated glazing with improved performance, smaller width and weight. 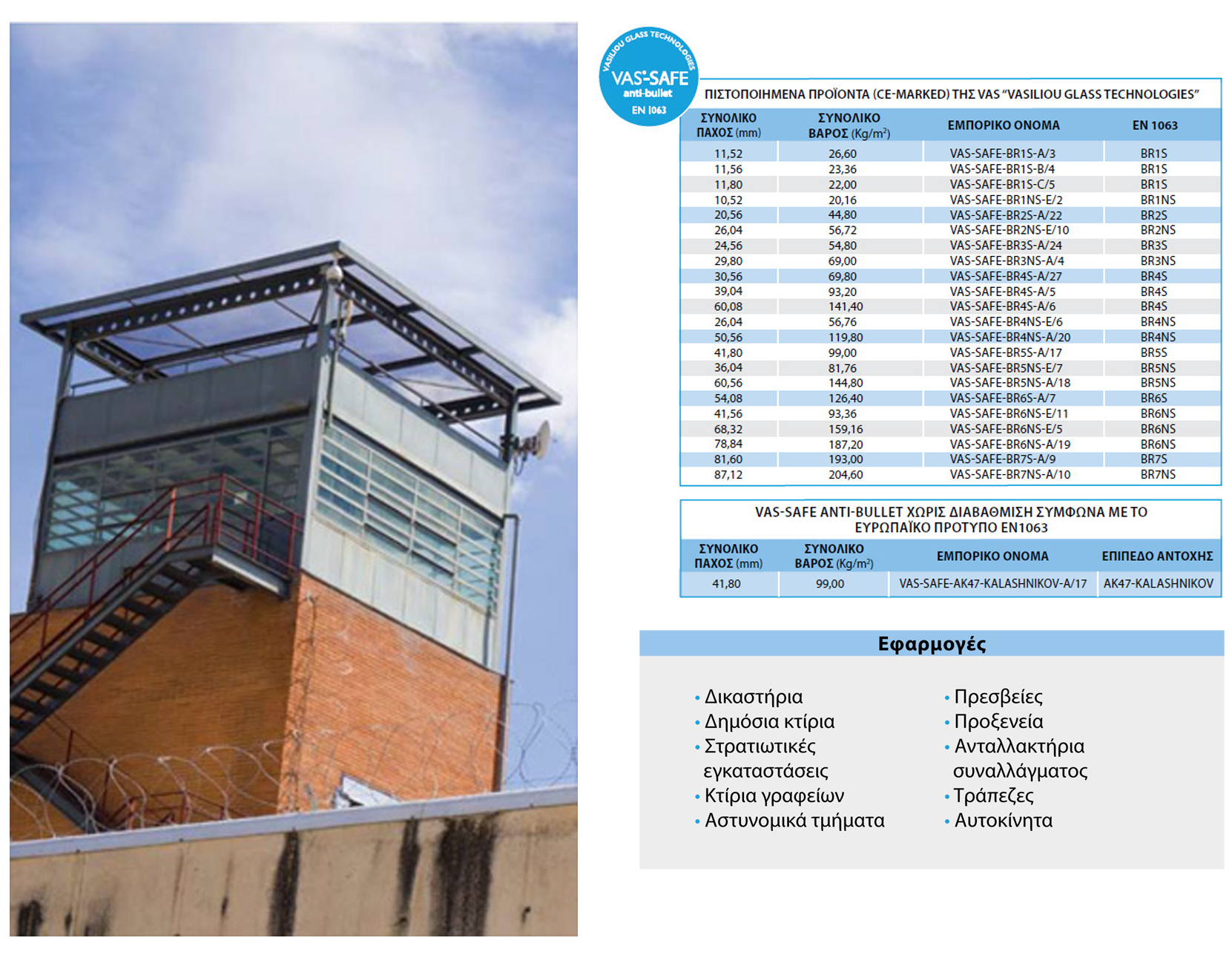